Lately I was looking for a way to display some app internal information to an external staff that is not a developer. I haven’t found a library that fit my needs. Hence I have written my own tiny library called DebugOverlay to do this job.

Usually we as developers would log app internal things by using logcat Log.d(). But what if we have to provide app internal logs to non developers? Can they access logcat? Do they have to install android studio and enable developer options on their android device? Wouldn’t it be nice if non developers could just see these logging information directly in the app somehow? In my concrete use case I was looking for a way to display tracking information on screen to allow external staff (not developers) to validate that the app was tracking the right information as the string to be tracked is computed dynamically for each screen (plenty of parameters and conditions).

Obviously, we can and should write unit tests for that (Robolectric powered unit tests could do that job much faster as instrumentation tests). However, there is a lot of money depending on the correctness of the tracking (advertisement contracts are negated on the reach of the app) and therefore an external staff has to verify manually that the tracking works correctly. As already said this external staff is not a developer. Hence he need a comfortable way to get displayed this information directly in the app. So how could we display the tracking information? The simplest way is to display a Toast, but that doesn’t work well when navigating fast in the app like swiping in a ViewPager. An alternative could be to add a TextView dynamically on each Activity and Fragment’s root layout. The problem with that approach is that this leads to fragile code.

What I really want is having an independent window just for displaying tracking information in a logcat alike fashion, something like this: 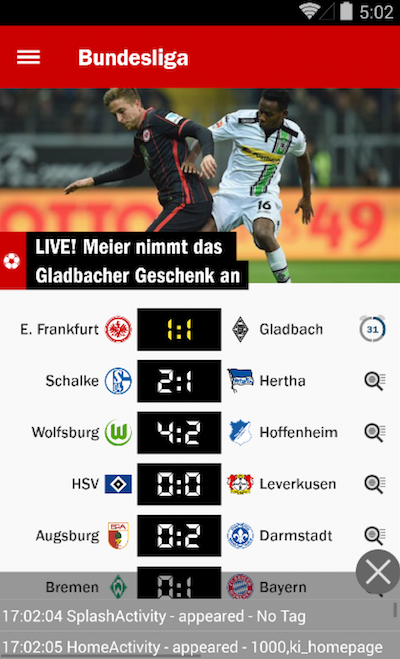 Why an independent window? Because I want avoid side effects on my production code. How to implement such a window? It’s easier than you might have thought before. I guess you have already heard or already used facebook’s chat heads. I’m sure there are plenty tutorials and blog post out there describing how to implement something like that. In a nutshell: Implement your own android Service and use the WindowManager to add a View. Yes, services can have Views:

At the end I put this simple service in a library and have created a facade class called DebugOverlay as public API. This class is also responsible to start and bind the service and to submit new log message to this service. So we can use the DebugOverlay like this:

Next you may ask how do I ensure that this debug overlay window is just added to debug builds and not to the release builds. I have created a second library artifact with the same DebugOverlay facade API but does nothing on method calls.

I use gralde build types to include the debugoverlay dependency that do display the debug overlay window in debug builds and use the other debugoverlay-noop dependency for release builds.

The debugoverlay-noop adds 1 class and 3 methods to your release dex file, which from my point of view is an acceptable compromise.

Please note that com.hannesdorfmann:debugoverlay:0.2.0 will add android.permission.SYSTEM_ALERT_WINDOW permission to your apk. Hence you should avoid to use that dependency in your release .apk

You can find this tiny library on github and is available on maven central.

It seems that I have missed some already existing libraries that could do the same job as DebugOverlay:

Thanks to everyone for reporting these libraries.