Why a library developer should use abstract class instead of interface

Use interfaces for java development they said. It will be more flexible they said. Well, that all might be true but for library projects that doesn’t necessarily has to be true as well. In this post I will explain you why I have switched from interface to an abstract class as base class in one of my library projects called AdapterDelegates 3.0.

To give you some background information: AdapterDelegates is a small library I have written to create composable Adapters for Android’s RecyclerView (favor composition over inheritance). I have described the idea and the reason why we need such a library in a previous blog post: Joe’s great adapter hell escape.

One may ask: Why have you defined interface AdapterDelegate<T> and not simply class AdapterDelegate<T>? Well, an AdapterDelegate is just a contract (or a protocol) that says this methods have to be implemented. That is exactly what interfaces are good for. Furthermore, we should program against interfaces, right? Instead of writing your classes in a way that says “I depend on this specific class to do my work” with interfaces it’s more like “I depend on any class that does this stuff to do my work”. By doing so we don’t rely on implementation details, are more flexible and loosely coupled.

That is exactly the case for my AdapterDelegates library. I depend on the RecyclerView’s Adapter API which, obviously, is not designed nor maintained by me. Concrete example: Few releases back a new method onBindViewHolder(VH holder, int position, List payloads) has been added to RecyclerView.Adapter class to support payloads. AdapterDelegates 2.0 interface only contained the method signature onBindViewHolder(VH holder, int position) (without payloads). If I want to add this method to interface AdapterDelegate<T> in version 2.1 everybody using my library would have to go into his source code and implement this method too. Otherwise his / her code wouldn’t compile. 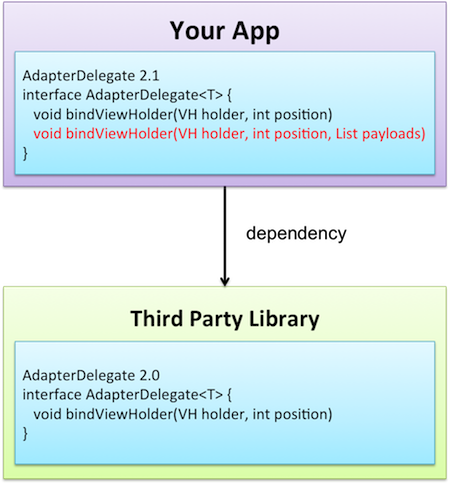 Then your code will compile but your app will crash at runtime. Why? Because the third party library is already compiled. Hence, no compile time error will be thrown but gradle will pack version 2.1 (can’t pack both 2.1 and 2.0 in the same apk, therefore uses the newer one) into your final android APK file. When invoking onBindViewHolder(VH holder, int position, List payloads) on a third party library component a NoSuchMethodError will be thrown at runtime. The android SDK faces the same issue. LINT warns you to add a check like if (Build.VERSION.SDK_INT >= 21) but there is no such mechanism for libraries packed in your code.

To avoid such problems Jake Wharton suggested to change package name and maven group id in his blog post Java Interoperability Policy for Major Version Updates. That is a very good strategy you should follow when publishing your own library. But what is a major version update? In my case, every time RecyclerView’s Adapter API changes that would be a major version update for my AdapterDelegates library too because I may have to add new methods to the interface AdapterDelegate<T>. That wouldn’t be very convenient for the users of my library.

Therefore, I have decided to switch to abstract class AdapterDelegate<T> because most likely the development team behind RecyclerView will add new methods to introduce new optional features. At least that was the case in the past. By using abstract class instead of an interface I can add this methods “silently” in a minor version update (not major version update) by providing a default implementation, which abstract classes allow me to do, but interfaces don’t (before java 8, available in android starting at API level 24).

Now you may roll your eyes and ask: What about all that inheritance shared state and behavior nonsense you told me before and that I can’t be sure that by inheriting from a super class I am not breaking something without checking the source code of the super class.

Well, that still is true. However, I as a library developer restrict myself to define abstract class AdapterDelegate<T> just like I would define an interface by using abstract methods except the fact that for newer optional features I will provide an empty default implementation:

So you, as user of this library, can checkout the source code and understand easily that there is no shared state or behavior with your own subclass.

Please note that this is very specific to library projects and not a general advise to prefer abstract classes over interfaces. Furthermore, please note that there no one size fits all. I’m just sharing my personal experience I have faced while maintaining and developing libraries.